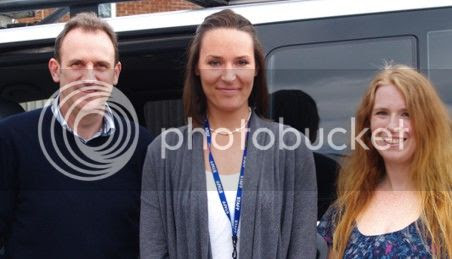 Me with Mostyn Price, the Senior Cameraman for Sky News, West of England Bureau and Isabel Webster, the West of England Correspondent for Sky News
Obesity during pregnancy has been in the news quite a lot lately, especially now that the NHS is trying to take steps to help prevent the complications that obesity in pregnancy can cause, such as large birth weight babies.

Because of the NHS' latest move, giving obese pregnant women diabetes medicine even when they have yet to test positive for gestational diabetes as a way to prevent overly large babies, Sky News decided to do a feature on it, and Slimming World let them know about me, because I lost a lot of my weight while I was pregnant.

I don't know how much of what they filmed will actually be shown, but they interviewed me with some questions. Then they filmed me cutting up fruit for the kids and handing out fruit to the kids. (The kids included some of the neighbors' children as well.) Then they asked us all to play games outside, and the kids chose "Duck, Duck, Goose." If they show it, you will see my 17 and 18 year old daughters as well as me, a 40 year old woman, playing "Duck, Duck, Goose" with a bunch of younger children (mine and the neighbors' kids). I am laughing just thinking about it!

The kids were fascinated with the news van, especially when the film taken was being sent to headquarters so the big satellite dish on the top of the van adjusted to angle skyward.

Both Isabel and Mostyn were really nice. I just hope I don't look like an idiot on film!