A little while ago in my Slimming World group, I won the Woman Of The Year title for our group. Today, I got to go to Bristol for the district semi-finals.

First off, my day began and, knowing they were going to be weighing me again when I got there, I debated spending some time on the elliptical crosstrainer in the morning, but, after being awakened twice during the night because of my children, I was way too tired, so I decided not to bother.

Last night, I had tried on a dress of mine. I had never worn this dress before. The last time I had tried it on, at the same weight I am now, it had been too tight to zip up. Now, even though I am still the same weight, I was able to zip it up, which shows me that all of my fitness and exercise is paying off in inches even when it's not paying off in pounds-off anymore.

The dress' pattern was not one that goes well with my coloring. I am very freckled and this dress was a leopard print. Fortune was with me in that my 16 year old daughter had the exact same style of dress in a different color. It had black and white stripes going down it. She was willing to trade with me, and the dress was flattering enough, so I decided to wear it today.

My Slimming World consultant came and picked my husband Robert and me up to take us to the competition. Once we got there, we weighed in and then were split into groups. There were 21 of us there, and we were split up into groups of 7 to tell our stories. We were given pieces of paper with numbers on them to determine what order we would speak in.

I drew number 4, so my turn to tell my story came fourth. I was nervous, and with only five minutes to tell my story, I felt like I had left a lot out. I tried so hard not to get weepy, but when I started to tell these new people my story for the first time and detail how poor my health was before losing the weight and how hard it was to be a good mother when I had no energy and was in pain with every step I took, I couldn't help getting a bit weepy thinking about it as I told it.

After telling our stories, we were sent out of the room to have some coffee or tea while the judges picked nine of us, three from each group, for the district finals. Then we all went back into the room where we were given plaques stating that we had made it to the district semi-finals. Then the nine finalists were called out. My name was the first one called out.

This meant that I went to sit in a circle in the middle of the room with the eight other finalists and we all had to tell our stories again, this time with everyone in the room listening. This time, the paper I drew said 2 on it, so I went second.

Some of these women's stories were so touching and really moving! Some of them had been through so much, and it was incredible to hear their stories of hope and how they overcame obstacles in their lives. It was an honor to be in the room with these other inspirational women.

I couldn't help being nerovus. Both times I spoke, it felt as though I had goofed and not done very well, but Sharon (my consultant) told me I had done fine.

Then we had to leave the room again and wait for the judges to make their decision. Only two would go through to the next round.

We were called back in and we all sat and waited. The first name was called, and she was a very pretty woman who had told a great story about her experience losing weight through Slimming World. The second name was called and it was me! I was so pleased and honored!

I got another engraved pen and paperweight, a framed certificate stating that I had won and an absolutely beautiful bouquet of red roses.

I had a fun day, made some new friends and now, I get to go to Slimming World headquarters in Derby for the Woman Of The Year finals. I am really looking forward to it. Some of you may remember that Robert and I got to go there for the Couple Of The Year 2010 semi-finals, got through the final round and then lost out to another deserving couple. We really enjoyed that and so I have a bit of an idea of what to expect this time.

Two things I want to remember about today:

1 - One of the women who got to come from one of Sharon's other groups was really wonderful and said that being shown my before and after photos and told about how much I exercise inspired her and is what really got her to start to exercise. That meant so much to hear! She said she will come to our later-at-night group soon and I hope she does!

2 - One of the members of my Slimming World group has recently joined to become a Slimming World consultant. Today I was informed that, during her interview, when asked what inspired her, she mentioned me and the weight loss I have achieved. That was so awesome to hear, and I will be sure to give her a hug when I see her tomorrow at our group meeting! (Everyone in our group are friends with one another. It's hard not to be friends with them all when they are all so terrific!)

(I am really so pleased and happy about winning this stage that I am over the moon and dancing around inside right now, but I'm still able (I hope) to maintain my outward composure, so you wouldn't know it to look at me.

Some photos from the day: 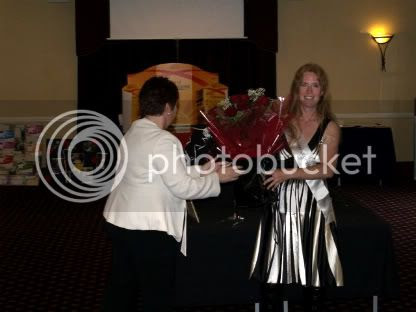 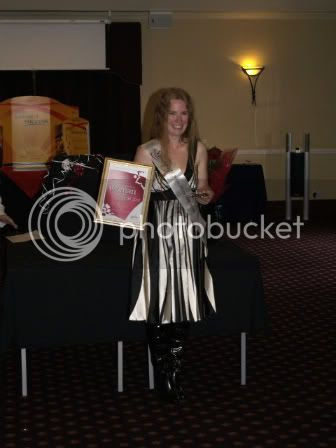 All of the semi-finalists:

All of the finalists (with the district manager): 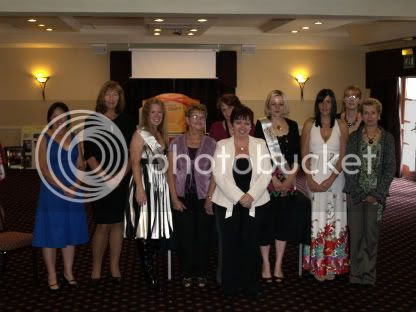 The winners with their consultants: 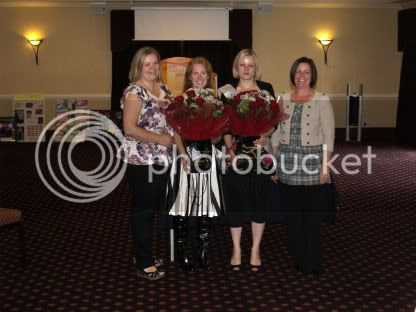 The other finalist and me: 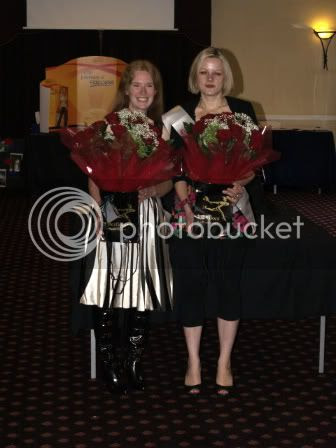 The judges and the "counters" (the ones who kept track of the time we had to do our speaking): 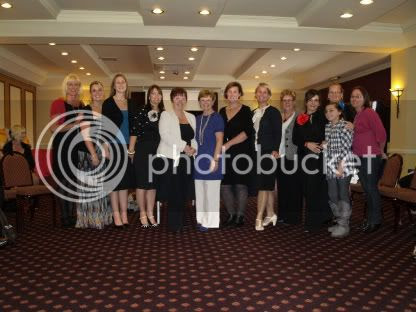 There were three of us there from three of my consultant Sharon's groups, and this is a photo of all of us with Sharon: 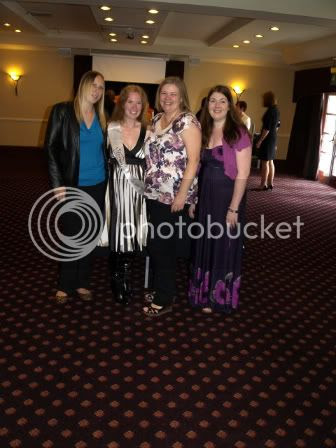 The important thing to keep in mind is that everyone there today, whether winning the competition or not, are winners for having lost weight and become healthier.
Posted by Becky Fyfe at 12:54