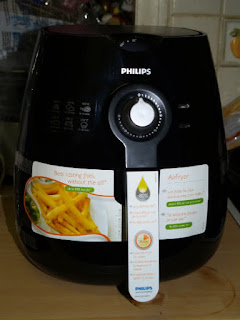 I was lucky enough to be given the opportunity to review the Philips AirFryer, something I have really wanted to try out.

The AirFryer makes it simple to give food a "deep fried" taste without using a lot of oil. The instructions say that, if you are using convenience food (like frozen chips (french fries) or chicken nuggets for frying), you don't need to add any oil to it at all. When using fresh, homemade ingredients, such as potatoes that you've peeled and sliced yourself, you need to add a very small amount of oil. For 500g of potatoes, you only need to add 1/2 a tablespoon of oil.

According to the materials that came with it, the Philips AirFryer will save you 80% of the fat in your "frying."

The Philips AirFryer arrived encased in a lot of packaging, but I was thankful to see that it didn't contain any styrofoam in its packaging. 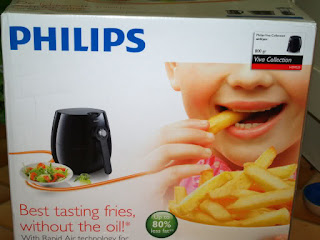 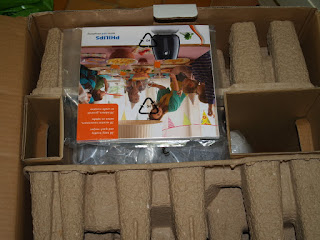 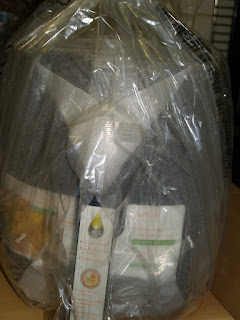 I was given this Philips AirFryer in exchange for my reviewing it, so I figured I had better try out both methods of cooking with it. First, I cooked up some "fry chips" from the freezer section of the grocery store. 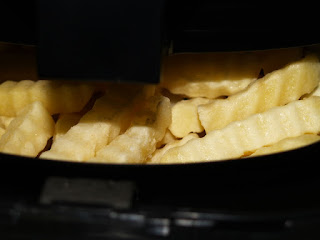 It was really easy to make them. First you set the temperature. 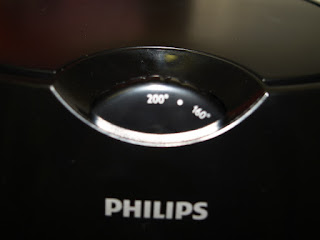 Then you put the chips in the AirFryer. 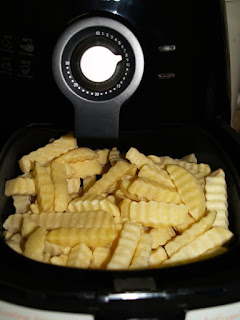 And then you set the timer. 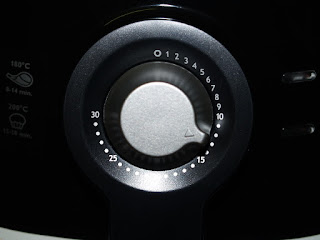 Halfway through the cooking, you take them out and shake them up and put them back in. It was a very simple process, and by the end, my kids had some delicious chips (french fries) that tasted, as my five year old kept telling me "absolutely delicious!" (She also told me that she really likes my new "thingy" that helped me make them.) Chicken nuggets and chips (french fries)ar enot the healthiest of foods, in general, but if you must serve them up, then cooking them without any added oil is a good thing. And the Philips AirFyer lets you do that while retaining that "deep fried" taste that you won't get from oven baking. 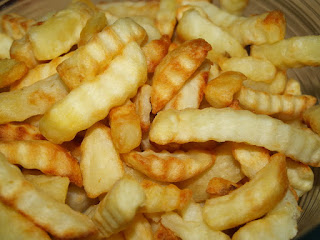 Having made the chips for their dinner in just 13 minutes, I then added some chicken goujons to my AirFryer. The chicken goujons came out perfectly too, and they were just as easy to "fry". 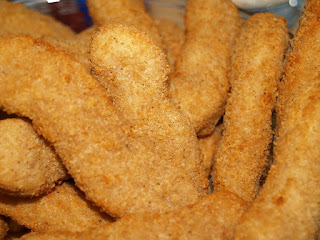 Having cooked convenience food in the AirFryer, I then had to see how well it worked with fresh food, so I peeled and sliced up some potatoes and went through the very simple process again. The chips (french fries) made with the AirFryer came out really well, although I may have cooked them a few minutes too long. They did have a taste very much like they had been fried, and I only had to use a fraction of the oil I would have had to use without it. 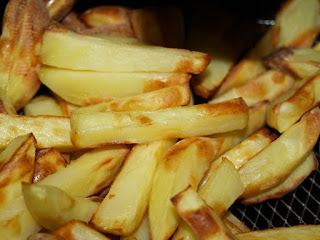 After I'd done all of the food for the night, I realized that the machine had come with a metal divider to be used when cooking two things at once, so I could have "fried" the chips at the same time as the goujons.

The Philips AirFryer also came with a recipe book. I love recipe books, and this one had some great recipes in it! I found out I can even make brownies in the machine, but I will more likely use it to make some of the healthier recipes that the cookbook contained. It has recipes in it such as "fish and chips," "crispy curry potato cubes with coriander salsa," "feta triangles" and "meatballs with feta," just to name a few. All of the recipes in the recipe book contain the nutritional values of the dishes.

Overall, I am really happy with the Philips AirFryer, and I am looking forward to making many more meals using it.