Another Weigh-in & Teaching A Dog To Run

Robert wasn't able to come to the meeting with me because we didn't have anyone to babysit the kids. He might go to one of our Slimming World consultant's other meetings this week though.

I'd have liked to have lost at least two pounds this week, but I'm happy for any loss. Even though I only lost 1.5 pounds, I still won Slimmer Of The Week this week and got to bring a bunch of fruit home.

This week, on my daily hour-long walk with our dog, I've been adding in short bursts of running. The reason I'm not running for longer than a block at a time is because I need to work my way up to it, but another reason is that my dog, a beautiful border collie named Mercury, really doesn't have the hang of running with me yet. He no longer jumps around in front of me and nips at me. Now, he starts jumping around in front of me while grabbing his leash in his teeth and growling and pulling me faster. On rare occasions, I can get him to do a short run properly with me, but it really is a rare occurrence. I'm not sure how to train him in this. I need to teach him that I'm not trying to play games when I run.

If anyone has more experience with training dogs, particularly border collies, please do chime in in the comment section!

Mercury is only about 15 months old. Here's a couple of photos of our lovely pup. 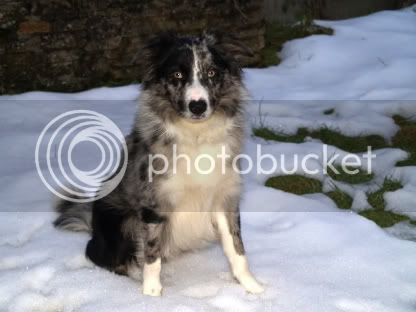 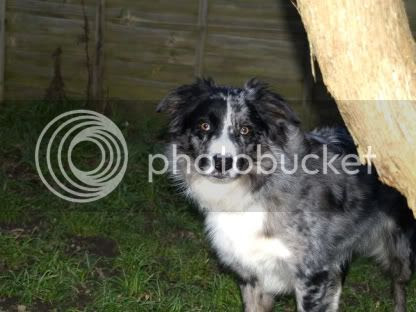 I've lost a lot of weight, and I've noticed a lot of changes in my body along the way.

I'm not as tired as I used to be. I get more done around the house, and, when I get enough sleep, I don't drift in and out of sleep every time I sit down during the day. Before I lost the weight, I used to get so sleepy throughout the day. It didn't make a difference if I had plenty of sleep at night, I was still tired. But now, as long as I've had a good night's sleep, I don't get sleepy during the day.

My memory is better. It's not perfect, because I am a mom and thus subject to mommy-brain. But before embarking on my healthy lifestyle, I was always forgetting things and finding it difficult to concentrate. Now, I have a much improved memory and ability to concentrate.

I'm more active with my kids. Just last weekend, Robert and I took our six year old daughter Gabriella with us for a long walk with the dog. I ran and played with both her and the dog, and it was a joy to see her smile and to hear her laughter. But, when I first started running with the two of them, the first thing she said was, "Mommy! You're running! I've never seen you run before!" And the sad thing is that she was right. I had never run with her before.

I'm physically stronger. I used to struggle to carry my children when they were babies. I'd get exhausted and my back and arms would ache after holding one of my babies for just minutes. Now that I exercise, eat healthy and even lift weights on occasion, I lift my two year old Connor (who will be three in August) without too much difficulty. We play "airplane" where I will lift him by one arm and one leg and spin him around until we're both too dizzy to go on. (Like most kids though, when I put him down, he starts asking me to spin him "again" even while he's still stumbling with dizziness.)

The other day, I took him walking with me to go and pick up his sister Isabella (who will be four in August) from preschool. On the way back, I asked him if he wanted me to pick him up. (Neither of them ask me to pick them up anymore, because they "know" from past experience that the answer will be "no.") He did, so I picked him up and carried him for a couple of blocks. I even ran on and off while carrying him just to hear his laughter Just as I had decided I should put him down and give my arms a rest, Isabella fell over and scraped her knee. So then I had to pick her up and carry her just after I put Connor down. And I had to do some running and bouncing of her in my arms to turn her tears into giggles. About a block later, she was ready to be put down, and then Connor wanted back up in my arms. It was only one block more before we got home. I would never have had the strength to have carried either of them a year ago, before working on my fitness and losing so much weight. (I would never have even offered to carry either one of them.

I'm stronger mentally. I have more confidence now. I believe in myself more. I have a more positive outlook on life. I'm less afraid to try new things or meet new people.

I just know now that I am stronger, more energetic and happier. The only question I have now that I ask myself is why did I take so long to decide to get fit in the first place? Why would anyone rather live their life feeling sluggish, unfocused, weak and unable to do something as simple as play with their children?

What are you doing today to make yourself stronger?
Posted by Becky Fyfe at 05:04 7 comments:

I hate the word "obese." I have been classified as "obese" for many, many years now. As of today, I am no longer obese! My BMI is below 30, and I am now classified as "overweight." I have lost over 40% of my starting weight.

There was a time when I thought that I had too far to go and that the amount I needed to lose was just too great and insurmountable to ever manage. But look at me now! It's like running a marathon; I keep taking it one step at a time, one small goal at a time, and now I am almost at the finish line!

Slimming World is looking for consultants from here to go and work in the US and set up Slimming World groups over there. I keep wondering if Robert and I should look into it as a way to move back to the US.
Posted by Becky Fyfe at 14:13 17 comments:

Think you can't ever enjoy the mouth-wateringly delicious taste of chocolate ever again? Think again!

Scientists for one of the world's largest chocolate company have created a new chocolate that contains 90% fewer calories than normal chocolate! They are calling it the Vulcano, because although it will melt in your mouth, it won't melt in the sun.

"Developed in a laboratory under top-secret conditions by an international team of food engineers, it not only has 90% fewer calories than the average chocolate product, it is also heat-resistant to temperatures of up to 55C (131F). Most chocolate starts to melt at 30 degrees."

It's not expected to be available for purchase for another two years. The question is, can you wait that long?
Posted by Becky Fyfe at 06:55 6 comments:

1. Write everything down that you eat, keeping an ongoing total of your daily calories. Some days your calories will be a little higher than your maximum, and other days they will be lower, but try not to ever go below 1,200 calories.

2. If you're counting calories, don't count the calories in most fruit and vegetables, so you can eat as much of them as you want. (I love, love, love strawberries.)

4. Limit your breads and flour products, but when you do have bread or burrito shells, go for wholegrain ones. That also is true for pasta and rice.

5. Do have desserts, but get creative in cooking up healthy desserts, or buying low-cal versions of things you hate doing without.

8. As often as possible, cook your food from scratch. This way you know what's in your food. The more processed something is, the less healthy it probably is.

9. Don't obsess. There will be times when you eat something bad for you. Do not see yourself as a failure because of it and then go on to eat more junk. See those times as a momentary blip in your healthy eatng plan and go right back to eating healthy.

10. One of the best tips: Fill your plate 2/3 full with vegetables/fruit, then add your meat & whatever else to the space that's left. If you are really hungry and need seconds, that's okay, but do the same thing again (filling plate 2/3 with vegetables).
Posted by Becky Fyfe at 23:27 12 comments:

I also found out that there is a competition coming up at Slimming World. It's for Woman Of The Year, and the winner will be voted on from however many women fit the criteria. One of the criteria is that I have to have lost a minimum of 4 stone. Since I've lost almost 8 stone now (7 stone 10.5 pounds), I meet that qualification. But the other one is trickier. Based on my height of 5'2", I can only have a maximum weight of 10 stone 10 pounds to qualify. (That's 150 pounds.) Right now, I weigh 11 stone 9.5 pounds.

The competition is being held on August 24th. It only gives me 7 weeks to lose 13.5 lbs. Now that means losing about 2 pounds a week, which sounds reasonable, except that I am not losing that quickly anymore and I definitely am not able to lose that regularly anymore either.

This summer has been a hot one for us here in England. I suspect it's been hot for a lot of places in the US and around the world too. When the weather gets this hot, it's important to remember to drink enough water. Are you drinking enough?

My on-line shop Fyfe Photography & Design recently aquired a partnership (through it's printing supplier) with Sigg bottles to sell designer versions of BPA-free Sigg water bottles. In honor of this, I've decided to have a give-away. 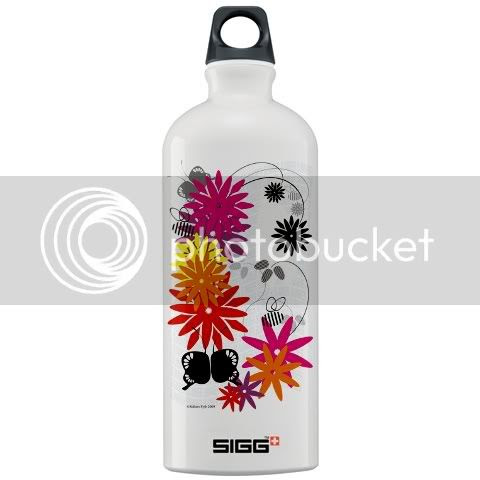 All you have to do to enter is comment on any post in this blog between now and August 5th. You can get up to 4 entries by commenting on 4 different posts. Winners will be selected by a random number generator on August 6th and announced in a new post at Skinny Dreaming. Contest NOT limited to just the USA. (The winner will then have one week to respond and e-mail a mailing address. If the winner is not heard from one week after he or she is announced as the winner, a new winner will be selected by the random number generator.)

I reserve the right not to publish or enter comments I deem as spam.
Posted by Becky Fyfe at 10:37 58 comments: