Tonight, my Slimming World group was having a party. It was to honor the Top Target member of the group. Everyone who reached target would be up for the award and then we'd vote on the winner. There were no target members last week. Robert thought he had 5 pounds left to reach his target weight, but he must have put down a lower weight on his forms because Sharon told him he had 7 pounds left.

He decided to go all out this week to try and reach his target weight in time for the party. Halfway through the week, he weighed himself and told me that he didn't think there was any way he could reach it in time.

Robert lost NINE POUNDS! He not only reached his target weight, but he passed it by two pounds! He now weighs, at 6'8" tall, 194 pounds! He was the only member at target, so he won the award! He got a sash, a paperweight and pen set and a certificate. 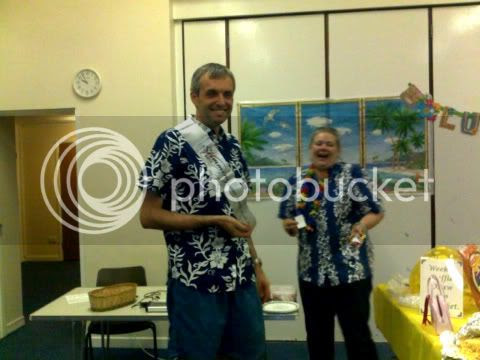 The theme of the party was a beach one. I wore a white summer dress that I had recently bought. This is significant because I have not worn the color white in many, many years. I tend to always wear black and other dark colors. Robert bought me a lei set which came with the neck lei, leis for my wrists and one for my head. He also bought me some really silly sunglasses. He wore his swimming trunks, a Hawaiian shirt, a lei and some equally silly sunglasses. We brought two beach balls and a giant inflatable shark to help add to the ambience.

Because this was a party, we were all supposed to bring some syn-free and low syn food to share. Robert brought some Herby Egg Pancake Wraps. I brought a Mexican Egg Casserole. There was a lot of other really nice food there tonight, and we had a fun time.

(I have other photos to post from the night, but I am still waiting on our Slimming World consultant to e-mail them to me as they were taken with her camera. When she sends them to me, I will add them to this post.)
Posted by Becky Fyfe at 23:14