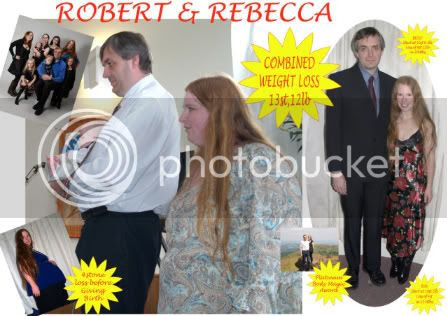 Robert and I just got back from Slimming World's Couple Of the Year semifinals. We sat in a group of 6 couples and all told our stories. There were three groups of six couples.

Six couples were chosen from those to go on to the finals. Robert and I made it to the finals. We didn't win. (Darn it!) But the woman in charge of today came over to us and told us how much she had wanted us to win too and that we were a VERY close second. She said it was extremely close.

The winners won £3,000 and an appearance on GMTV's morning show. They also will be doing other interviews and tv appearances throughout the year and will be featured in the Slimming World magazine. The couple who won had lost a combined weight of over 15 stone (over 210 lbs) together!

I wish we'd won (especially knowing how close it was), but it was still a really fun experience, and we heard lots of inspiring stories. We got to stay in a lovely hotel overnight, and we used their gym facilities to get in a really intense workout last night.

After taking a train ride to get there yesterday, our Slimming World consultant Sharon drove us home today after the event. And when we got home, our kids had surprised us by cleaning the house! They all said how proud of us they were despite our not having won.
Posted by Becky Fyfe at 09:56