I'm In This Week's Take A Break Magazine 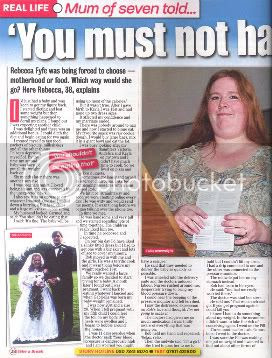 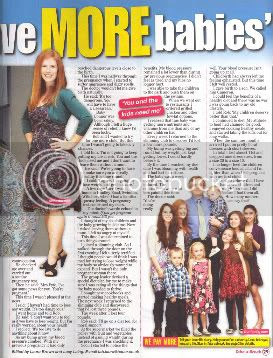 They got some of the details wrong though. For instance, it says that I had Connor by cesarean, but I have never had a c-section, though I was threatened with having one. It also states that Robert and I met in a chat room, and that I had gone on-line out of loneliness, which is all incorrect, although Robert and I did meet on-line. The general gist if the story is correct though, and I believe they tried to get the details right.

The thing that annoys me about the article though is that they name the street we live on. The article talks about my kids and large family. It even names my kids. It shows a picture of my whole family, kids included. And then, as irresponsible as it is, it mentions MY STREET ADDRESS! And the thing is, my street address was not even germaine to the story!

I am not overly worried about it though as we are moving within the month, but if we weren't I would have been fuming.

Either way, it's fun being featured, so if you are in the UK, go have a look at this week's Take A Break.