I lost one pound this week despite being very strict with my eating and exercising tons. (I've now lost 116.5 pounds.) I'm being told over and over that I am doing too much exercise. This coming week will probably see me gaining weight, hopefully not too much though. I am going to lay off the exercise for this one week only (except for a few bike rides which I'll be doing because it's fun). I am even going to let myself indulge in a few of the treats my parents sent back with my teenage daughters from their trip to the US.

I am hoping that my body will decide, with this week "off," that it doesn't need to hang on to my body's stores of fat and then the following week, I can start losing again without overdoing the exercise.

It might not work, but I am hoping it will, and either way, I know I can lose whatever weight I put on this week.

Our Slimming World group had its Woman Of The Year Competition. It was between me and a woman named Eve. Eve had been in the competition in a previous year and had lost to her sister. This year, she won. She has lost a total of 53 pounds, and she looks great! This is her second time losing the weight because she had a child after the first time she lost it and put the weight back on. However, she was determined to lose it again and did. Congratulations to Eve! 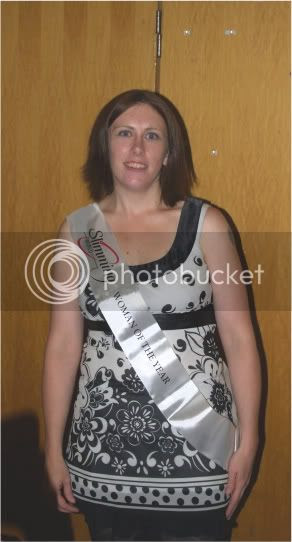 It was a "Bring & Share" night, so we got to try lots of different dishes. I brought Chocolate Nest Buns, my own variation on a recipe in my Slimming World's 100 Best Desserts book. Robert brought High Fiber Scotch Eggs and Chocolate Gingerbread Squares. He also made some healthy homemade Potato Chips ("crisps" of you live in the UK), but he forgot to pack them to bring with us. There were a lot of desserts brought and a few savory dishes too. It was a fun evening.

I brought along some before pictures to show people. (I still can't believe how big I had gotten and how fat my face was just a little over a year ago.) When I was printing the photos up from my computer, Gabby (my 6 year old) walked in, looked at the photos on the computer screen, and asked, "Mommy, are those pictures from when you were squishy?"

So I've now decided that I was never "fat" or "morbidly obese." I was just squishy.

For those of you who still have a lot of weight to lose and are still squishy, and you feel you need a little inspiration to get you losing, let me just say that I can't even describe to you, but I wish I could, how wonderful it is to feel like a normal person again. I still have 21 pounds to lose, but I already feel like a normal-weight person. I'm no longer lumbering along, tired and energy-less, encased in over 100 pounds of fat. And it feels fabulous!
Posted by Becky Fyfe at 00:22